Thank You Every One!!

Whiskers through the ice

One of the hardest things for most anglers is to fish a new lake that they have never been on before. But there are a few things you can do to make that trip on new water even better the next time you try it. I like to break up my trips to new water into three key stages. When you take these steps it makes the idea of being on new water, less intimidating and makes for a successive trip more often. The three key stages I break the trip up into are: Info gathering Game pla

Thank You Every One!!

So logged onto my YouTube channel tonight to check my PM and I noticed something very cool. I can't thank everyone enough who watches my channel and shares my videos. Thanks, everyone. Let's see how fast we can get my channel to 3000 subs!! If you have sub follow the link to my channel I have a lot of good stuff planned for this upcoming spring and summer. https://www.youtube.com/OutinMichigan

Whiskers through the ice

Catfish through the ice! This has been a type of fishing that has intrigued me for some time. Ever since I 1st seen it on in-fisherman I have tried to learn more about. I have had success a few times on targeting them. When and Where When: Mid to late winter, the dog days of winter Where: The basins of the lake with at least 15ft of water. They will group in the basin and you’ll find them on the bottom or suspended up in the water column. Focus on smaller lakes with a good

History of Redears in Michigan

Redear Sunfish Lepomis Microlophus which is also known in the southern states as “Shellcrackers”, was first stocked in Michigan around the mid-50’s. At that time some good populations and fisheries developed and became self-sustaining for over three decades. Some of these waters occasionally produced trophy-sized fish, from an area of the state with heavily fished water that gave up very little trophies of native panfish.At the time no other large-scale, purebred stocking pr

Over the years I have explained this to many fishermen. I also see the question on the online forums all the time about what is a good sensi 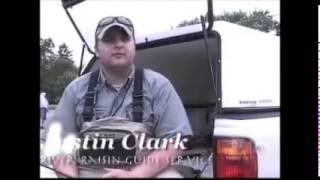 Throw back My 1st time!

This is the show that started it all for me. It was shot just as the spawn was ending and just as bass season was opening up here in Michigan in 2008 or 2007. To tell you the truth I don't really remember the year. I know I was young and wet behind the ears then. It aired about two weeks after filming it. The footage is by Gabe VanWorm a producer with Michigan-out-of-doors.